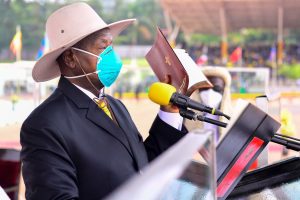 Yoweri Museveni has been sworn in for a sixth term as the President of Uganda.

Museveni, 76 was sworn in at Kololo Independence Grounds, in a ceremony graced by several African leaders including the president of Kenya Uhuru Kenyatta, Tanzania’s new president Samia Suluhu Hassan, Democratic Republic of Congo’s –DRC Felix Tshisekedi and others.

The administration of the Oath of Allegiance and the Oath of the President was subsequently presided over by Chief Justice Alfonse.