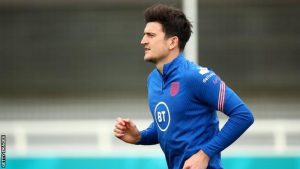 Defender Harry Maguire says he is fit and available for England’s second Euro 2020 Group D match against Scotland at Wembley on Friday.

The Manchester United captain, 28, has been sidelined for more than a month with an ankle ligament injury.

“I feel good. I’m back available, been training and I’m looking forward to it,” said Maguire.

The former Hull and Leicester centre-back suffered the injury in the closing stages of Manchester United’s Premier League win against Aston Villa on 9 May.

He missed the end of the Premier League season, United’s Europa League final defeat against Villarreal and England’s two warm-up games, against Austria and Romania.

However, he was still named in Gareth Southgate’s 26-man squad for the European Championship in the hope that he would recover in time to play some part in the tournament.

“Obviously the injury was a setback club football wise,” said Maguire. “Internationally I wanted to come into this with a lot of games under my belt with full fitness.