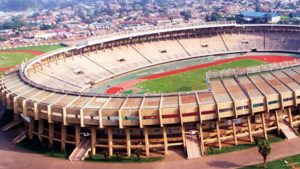 Ministry of Education and Sports has secured Shillings 30 billion for the renovation of Mandela National stadium Namboole.

This comes after the World football governing body FIFA and the Confederation of African Federation (CAF) banned the stadium from hosting international games.

The Minister for Sports designate, Hamson Obua, says the renovation works will start with effect from the next financial year on 1st July 2021.

In May last year, the Confederation of African Football (CAF) and Federation of International Football Association (FIFA) disqualified Mandela National Stadium from hosting the forthcoming 2022 world cup qualifiers, saying the facility is substandard.

The football bodies found the pitch, toilets, pavilion and dressing rooms at the Mandela Stadium in a very bad shape and recommended total renovation. Mandela Stadium has been the home ground for the national team, the Uganda Cranes since 2002.

Obua had earlier said that they need about Shillings 96 billion to renovate Mandela stadium for the first time since it was established in 1999. Although the stadium was free earlier this year, it has been converted into a COVID19 treatment center as Uganda battles the second wave of the virus, which might affect the planned renovation.

However, Obua is optimistic that they will overcome the current situation to pave way for the immediate plans to refurbishment the facility.

The renovations will cover dressing rooms, playing surface, running track, installation of desks and air conditioners in the media and VIP sections, seats in the general public stands and upgrading floodlights as directed by CAF.

This comes at a time when Uganda is not sure whether the World Football governing body FIFA will allow it to host her world cup qualifiers at St Mary’s Kitende, the only available option in the country.

The cranes are lined up to play Mali, Kenya and Rwanda in-group E in home and away games. The games kick off in September this year. Obua also revealed that the sports ministry has embarked on efforts to vaccinate athletes in all sports disciplines.