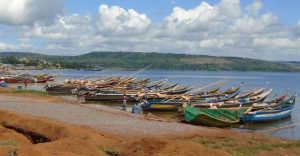 Local leaders at various landing sites along the shores Lake Albert in Hoima district have expressed concern over the uncontrolled movement of people in the area.

Robert Mujuni, the Kaiso landing site LC1 secretary for health and education says that due to the Uganda’s porous borders along Lake Albert, there is an influx of people from neighboring DR Congo who continue to illegally cross into Uganda.

He says the influx may result to the spread of the Covid-19 Pandemic in the area. He notes that people from Congo are ignorant about the SOPs which he says puts the lives of many at risk.

Desire Jarekunga, the community coordinator for Covid-19 at Runga landing site says people enter into their area from DR Congo at night and it makes it difficult to identify them.

He adds that they have another challenge where people move from one landing site to another and this may result to the spread of the virus.

However, the Hoima Resident District Commissioner Yosam Tumwesigye says he communicated to immigration offices and asked them to talk to their counterparts in DR Congo to get a way of controlling the movement of their people during this period.