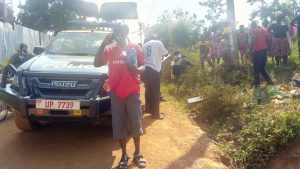 Residents of Bujumbura East, Hoima Oil City were left shocked on Sunday morning after they found the body of a dead baby dumped in the area.

The body covered in a box was found dropped by the roadside near a washing bay in Rusaka.

Eyewitnesses said the body had been lying on the road, less than 200 metres from Rusaka washing bay along Rusaka-Bujumbura road.

Kasim Asiimwe, the area defence secretary said the body of the baby boy is suspected to have been dumped at night.

He condemned the incident terming it inhuman and called for thorough investigations to ensure the mother is identified, arrested and prosecuted.

But Emmanuel Kaahwa, the area village chairman advised mothers or expectant mothers who cannot take care of newborn babies to take them to churches or children’s homes.

A team of police officers visited the scene and took the body to police morgue.