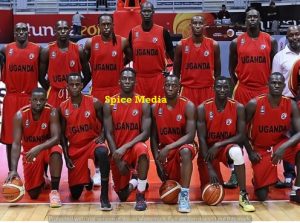 The Uganda National Basketball team, the Silverbacks on Thursday night defeated Morocco 77-65 to qualify for the 2021 FIBA AfroBasket.

Rwanda will host the 16-nation 2021 FIBA AfroBasket in Kigali from August 24 to September.

Uganda went into the do-or-die game after registering a 2-1 mark in the first round of Group E games after defeating Morocco and Cape Verde but lost to Egypt earlier last year. Ugandan’s second-round games were postponed as several players tested positive for COVID-19 in February in Monastir, Tunisia.

The Uganda Silverbacks who went into the game needing only one win either against  Morocco or Cape Verde faced a tough hurdle with the Moroccans whose only option was to win or exit.

In a tough game played at the City, Arena, Sale (MAR), Salle Bouazzaoui in Rabat, Morocco, Uganda made a statement after it dominated the game and ended Morocco’s 10 straight Afro basket appearance dating to 1999.

The Ugandan side which is making its third appearance at the Afro basket championship leaned on USA based Arthur Kaluma who scored 20 points, and five rebounds.

Kaluma was the much needed piece for Uganda as he converted most of his free-throws and attacked the rim when it mattered most.

Uganda led the first quarter of the game with 20-10, before Morocco put up a stronger comeback to lead the second quarter 21-12 to close the gap. The third quarter saw Uganda stretch the lead to 23-13 before a tougher final fourth quarter.

Although heading into the last quarter Uganda led by 10 points, too much pressure on the defense of Morocco cost Uganda several baskets as they turned over the ball. The team led by Kaluma came out strong to outlast the Moroccan side who relaxed on their guard.

The win for Uganda puts them at number two in the Group E behind Egypt who already qualified. Uganda will join Group D of FIBA Afro basket Champions that is composed of Senegal, Cameroon and South Sudan.

Uganda’s win will also give them a chance to join 15 other nations to compete in the 2023 FIBA Basketball World Cup African Qualifiers this year. Tunisia are the defending champions after they beat Nigeria in 2017.