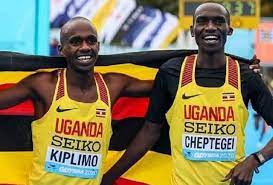 Uganda has scooped two medals at the Olympic Games in Tokyo this afternoon, thanks to star athletes Joshua Cheptegei and Jacob Kiplimo. The two won Silver and Bronze in the men’s 10,000m race.

Cheptegei posted 27:43:63 to finish in the second position slightly behind Ethiopian Selemon Barega with 27:43:22, while Kiplimo completed the race in 27:43:88. The two Ugandans put up a spirited and colourful finish to the games moving from the middle pack to challenge a combination of Kenyan and Ethiopian athletes to the finish line.

Earlier Ugandan Stephen Kissa led the pack through the first 16 laps before dropping out of the race alongside several other athletes. Commentators said the ‘conditions were terrible’ across Tokyo, with temperatures rising above 90 degrees.

But despite the humidity and the unbearable conditions, Cheptegei and Kiplimo maintained a good pace to give Uganda its first double in one race, in the history of the summer games. All seemed lost in the last lap when he fell from first to the sixth position but pulled through in the last 200 metres to beat competition from Kenyan athlete Rogers Kwemoi, Ethiopian Berihu Aregawi, American Grant Fisher and Canadian Mohammed Ahmed.

Cheptegei who entered the race as one of the favourites still holds the world record in the race which stands at 26:11.00, as posted at the NN Valencia World Record Day in Spain in October 2020. Winning Gold today would have broken Kenenisa Bekele’s 15-year-old record at the olympics.

Meanwhile, Kilplimo entered the race with a pedigree of running the seventh-best time in the race. Kiplimo ran for 26:33.93 in the Czech Republic earlier in May and booked a slot for the Olympics.

Kenya’s Geoffrey Kamworor who presented one of the biggest threats to Uganda’s team pulled out of the summer games after an ankle injury that could not see him run the 24-lap race, while the race’s defending champion, legendary Mo Farah also failed to qualify for the games missing the 10,000m selection time by 19 seconds at a cold and windy British Championships in Manchester.