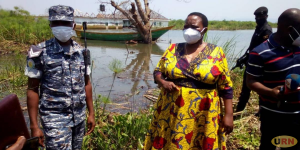 The government through the Office of the Prime Minister plans to resettle over 3,500 people displaced by floods in Buliisa district resulting from the rising water levels in Lake Albert. Floods have displaced thousands of people in Butiaba and Kigwera Sub counties and Butiaba town council in Buliisa district since March last year.

To date, the flood victims are stuck in churches and schools where they took refuge while others sleep under trees as floods continue ravaging the area. On Sunday, the Prime Minister, Robinah Nabbanja met some of the flood victims at Butiaba and Wanseko landing sites in Buliisa district and assured them that the government will soon find land to resettle them.

She explained that the government is currently profiling all flood-affected persons in the district and draft a comprehensive plan for their resettlement.

Fred Lukumu, the Buliisa District LC 5 Chairperson, says that the only option is for the government to resettle the flood victims as soon as possible since most of them are still languishing under trees and sleeping in the cold.

Moses Asaba, the Butiaba town Council LC 3 Chairperson expressed his excitement about the new initiative being undertaken by the government to resettle the flood victims. Joselyne Atuhura, one of the flood victims from Wanseko landing site, says that since March 2020 she has been sleeping in the cold together with her children since the floods completely submerged their home.