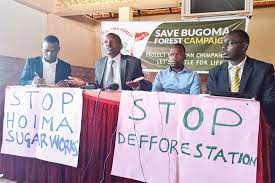 Residents of Rwekobe and Rwebaho villages in Kabwoya sub-county, Kikuube district on Monday stormed the offices of Kikuube district local government protesting a planned eviction from their lands by Hoima Sugar Company Limited.
A group of over 30 residents led by their local council one chairperson stormed the district headquarters seeking intervention by the district leadership into their misery.

According to him, the company took advantage of the lockdown, invaded the villages and started grading people’s gardens and homes.

Charles Twogyirwe, the LCI chairman of Rwebaho village says several houses have been demolished adding that he is currently housing over 20 women and their children who were evicted from their land.

The resident’s, lawyer John Kabandize of Kabandize and Co Advocates accuses the company agents of harassing and raping women and girls, denying residents access to water sources and tourture saying such acts of impunity should stop.