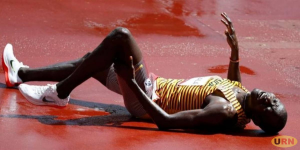 Uganda’s only middle distance runner on Tuesday failed to complete the first round of the 1500m race at the Olympic stadium in Tokyo after picking up a muscle injury.

Musagala 28, pulled off in the last lap after picking up a muscle injury and failed to progress to the semi-finals of the race. His heat was won by Great Britain’s Jake Heyward who crossed the finishing line at 3:36:14 while Ethiopia’s Teddese Lemi finished second in 3:36:26.

This is a big blow to the medal hopeful who went to the race ranked number four in the world with a personal best of 3:30.58 that he clocked in 2019. He joins Halima Nakaayi who also lost in the semi-finals of the 800m race.

Uganda’s only chance in the middle distance races lies in Winnie Nanyondo who advanced to the semi-finals of the race on Monday. Uganda had qualified only three middle-distance runners, Halima Nakaayi, Winnie Nanyondo and Ronald Musagala.

Musagala was making a return to the summer games, in the last edition of the events in 2016 in Rio de Janeiro, he finished 11th in the finals where he posted 3:51.68.

Meanwhile, Uganda’s only sprinter at the Tokyo 2020 summer games, Shida Leni also failed to progress to the semi-finals of the 400m race. Leni finished 6th in heat 3 posting 52.48. The heat was won by United States Star sprinter Allyson Michelle Felix who crossed the finishing line in 50.84.