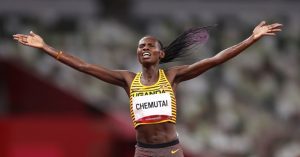 Uganda’s legendary runner Dorcas Inzikuru has hailed Peruth Chemutai for clinching a Gold medal in the 3000m steeplechase in the ongoing Tokyo 2020 Olympics.

Chemutai 22 beat all odds on Wednesday to become the first Ugandan woman to win an Olympics medal on day 12 of the Tokyo Games. She outran USA’s Courtney Frerichs and Kenya’s Hyvin Kiyeng who came second and third respectively.

Now, Inzikuru, who won several medals in steeplechase in different championships, says that she is happy for the gold Chemutai has added to Uganda’s medal tally in the Olympic Games. She also expressed joy for Joshua Cheptegei and Jacob Kiplimo who won silver and Bronze respectively.

Inzikuru also told URN that she has a tremendous impact on Chemutai’s sensational performance in the summer games, adding that she has been showing her how to jump huddles during national trials in Namboole and helping her to master the art of clearing the hurdles. She said Chemutai is capable of even breaking more records if she receives proper training.

She asked the government to empower sports by increasing funding, arguing that Uganda has the capacity to secure more gold medals if government prioritize the sports sector. According to Inzikuru, increasing the budge of sports will allow the recruitment of new talents in even from other parts of the country in various sports disciplines.

Inzikuru is currently the most decorated athlete in the 3000m steeplechase category. She won several medals including gold medals at the 2005 world championship and 2006 commonwealth games among other medals. Despite her excellent performance at different events, she never won an Olympic medal.

Bernard Ogwel, the General Secretary National Council of Sports hailed the Uganda Athletics Federation for always organizing athletes in their preparations despite the tight budgets they operate on.