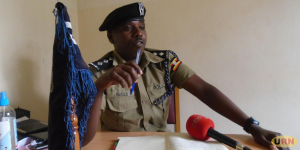 Seven Kikuube district officials who were arrested for alleged corruption and abuse of office have been released on police bond.

They were arrested on Wednesday on the orders of Peter Ogwang, the State Minister for Economic Monitoring in the Office of the President for corruption and negligence of duties.

It is alleged that they failed to supervise the construction of the various government projects that led to shoddy works and loss of taxpayer’s money.

It is also alleged that the officials only renovated the old buildings that are currently accommodating the district headquarters instead of constructing new structures.

While monitoring the various government projects in the district, Ogwang further discovered that at Nyairongo Seed School in Kabwoya Sub County, the classroom block that was constructed at 1.8 Billion Shillings had defects before it was commissioned yet the district officials had paid the contractor 98% of the money.

Julius Hakiza, the Albertine region police spokesperson said that the arrested district officials were released on Thursday evening after they recorded statements.

He however says the officials will be reporting to police as investigations into the alleged corruption and abuse of office cases put against them are ongoing.

The minister also toured education, water and sanitation projects but they were found in an appalling state despite being funded by the government.