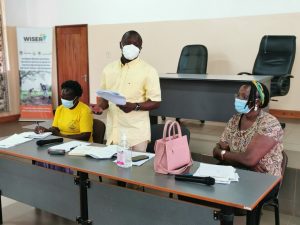 The maternity also has various defects, an indication of poor workmanship. The State Minister in Charge of Economic Monitoring in the Office of the President, Peter Ogwang detected the anomalies while monitoring and assessing various government projects in the district.

Ogwang wondered how the RDC would rush to commission the maternity ward with visible cracks on the wall, floor and ceiling. He also noted that the material used to construct the maternity was substandard, which compromises the integrity of the structure.

Information obtained by URN indicates that Mbabazi commissioned the maternity ward on August, 20, 2021. TRADIT Company limited undertook the construction works. Ogwang summoned the contractor to record a statement with police for executing shoddy work on the maternity ward.

A source at Kibaale central police station who spoke to URN on condition of anonymity explained that both the RDC and the Contractor were yet to record statements by Saturday evening in line with the minister’s directive.