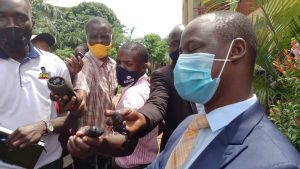 Justice Musa Ssekaana has upheld the election of Alex Ronald Akugizibwe as the Buruli County member of parliament. He delivered the verdict in the Masindi based High Court in his ruling on an election petition by Akugizibwe’s rivals Jalia Bintu Lukumu, Stephen Kabindi and Fredrick Bitamale.

The trio ran to court contesting Akugizibwe’s election on grounds that he was ineligible to stand by the time of nomination because he was holding a public office. They claimed that Akugizibwe was serving as a teacher at King’s College Buddo, when he was nominated.

Delivering his verdict on Tuesday, Justice Musa Ssekaana noted that the petitioners failed to provide substantial evidence to prove the allegations against Akugizibwe. He explained that Akugizibwe resigned from public office as a teacher at King’s College Buddo and handed over office as required in preparations for his election as Buruli county member of parliament.

Justice Ssekaana also noted that although Akugizibwe is a teacher by profession, the nomination form did not require him to indicate whether he is retired or still active in the teaching profession, adding that a trained teacher does not cease to be one merely because he has resigned or retired from his job.

He said the petitioners’ arguments on this issue was totally flawed and devoid of any merit adding that the right to contest in an election or the right to be elected is a pure and simple statutory right regulated by the constitution and other electoral laws.

Akugizibwe welcomed the ruling, saying the petitioners wanted to deny the electorate of their preferred choice. Lukumu and the other petitioners told Spice FM that they were still studying the ruling and consult their lawyers on their next move.