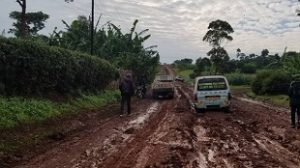 The police are yet to release the impounded Hoima district road equipment.

The equipment that includes a grader and a Vibro roller machine was found on a private farm owned by an Indian investor in Kigumba town council Kiryandongo district last month.

At the time they were impounded, the grader and the roller had their number plates plucked off.

The impounded road equipment has since been held by police despite the sorry state of roads in Hoima district. The equipment is currently parked at Kaduku police station in Kiryandongo district.

Julius Hakiza, the Albertine region police spokesperson says police cannot hand over the road equipment until they get clearance from court.

The equipment was impounded at a time when most roads in Hoima District are impassable due to the heavy downpour.

Residents are demanding that the equipment be released so that they can be used to upgrade the various roads that are in a sorry state.

John Tibasiima, a resident of Waaki landing site in Kiganja parish wants the court to release the equipment so that they can be used to work on roads that are in bad condition.

He however wants the court to punish the culprits who are alleged to have connived and hired out the road equipment.

Alice Ngamita, a resident of Kapapi sub-county wonders why they should suffer from bad roads yet the district officers hired the road equipment for selfish gains.