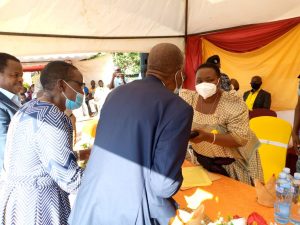 The Prime Minister Hon Robbinah Nabanjja has warned government officials against engaging in any form of corruption.

She has vowed to deal with any corrupt official to ensure better service delivery in the country.
She noted that corrupt officials are enemies of development since corruption reduces accessibility to services such as health, education and employment among others.

The Prime Minister made the remarks on Saturday while officiating the oil and gas opportunity dialogue organized Dr. Lawrence Bategeka, the former Hoima Municipality MP to mark seven years of Glory summit hotel.

She commended Bategeka for organizing the dialogue and called on leaders in Bunyoro to organize especial meetings and discuss issues affecting Bunyoro.

Dr Lawrence Bategeka, called on government to advocate for local content in Bunyoro region.
He says the oil and gas sector is creating several opportunities adding that there is need to empower the people of Bunyoro mostly the youth and women to benefit from the sector.

The Bunyoro Kitara Kingdom Prime Minister Andrew Byakutaga called for special planning for Bunyoro region.
He says that the growing population if not planned for some parts of Bunyoro will turn into slums.