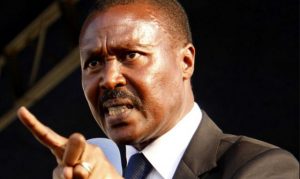 The President of the Alliance for National Transformation-ANT Gen. Mugisha Muntu has implored the Ugandan army operating in the Democratic Republic of Congo-DR Congo to focus on the operation.

Muntu, a former long-serving chief of the country’s defense forces, urged the UPDF to avoid repeating the unfortunate history made during the first and second Congolese wars.

Uganda participated in the 1996 regional coalition formed to fight Rwandan Hutu rebels and Ugandan rebels operating in DR. Congo and said to be supported by then President of Congo Mobutu Seseseko.

However, Uganda People’s Defence Forces-UPDF was accused of illegal exploitation of resources from the Congo in what came to be known as military entrepreneurialism. The United Nations -UN in its report named top military commanders and officers involved in what they called an elite network.

The same accusations emerged against Uganda, Rwanda, and Burundi during the 1998-2003 occupation in the eastern part of Congo in what was known as the second Congolese war.

In 2001, a UN report found that while the three countries went to Congo to secure their borders, they stayed there to steal resources.

Now, Gen Muntu says the entry of the UPDF into Congo is a double-edged sword, posing a challenge and also an opportunity for UPDF to salvage its image.
He says they have to focus on the job and avoid stealing Congo’s resources or engaging in any form of Human Rights violations.